I could not be happier with the home theatre installation Miro completed at my home. Miro's professionalism, dedication and attention to detail was top-notch and it is apparent he has the passion for his line of work and that combined with his superior work ethic has left me 100% satisfied. From the consultation to providing the quote and ultimately the installation, Miro was prompt in his replies and very helpful with his suggestions.

Miro came in under budget and delivered a home theatre and surround sound experience that has everyone impressed. I couldn't recommend Miro more highly. He takes his time to get the job done right and has continued to be generous with his time in ensuring that I know how to use my new system. Thank you Miro for making my living room a destination for movie nights! 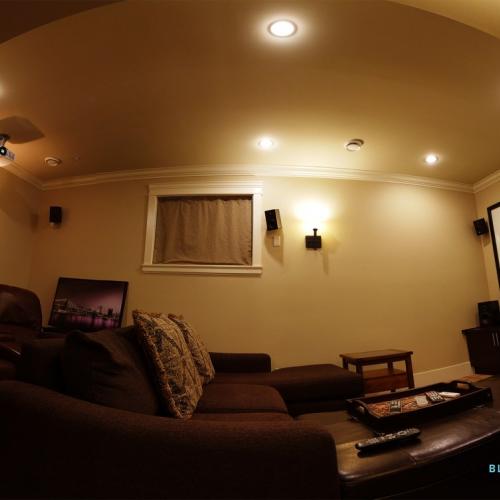 When we moved into our new home, our media room needed setting up from scratch. We contacted Miro at Blue Home Theater and he came the same day to determine the scope of the project. After he evaluated our room setup, including figuring out which wires roughed-in behind what wall and how, etc., he submitted his thoroughly detailed action plan for our review. We were impressed with his transparency from the get go. His proposal included the list of products he would recommend, where he sources them from and even how much he pays for them, along with website links for equipment and devices needed. No guessing game or surprise elements anywhere along the way. We were able to verify the prices directly at sources and learned that he does not add any markup, which means where he makes his margin is from his services portion of the proposal only, which was beyond being fair and reasonable.

We had no idea what kind of equipment we would need, so many of those products he introduced to us were knew knowledge to us. For example, I’ve never heard of Marantz receivers before or AV Sound Authority subwoofers, not to mention their too technical specs that we would not understand anyways. Miro made it very easy for us to understand all those techy details and helped us to make a decision on which specific equipment to buy.

We’ve witnessed first-hand that media room setup process is far more complicated than I had imagined. For example, a 20ft HDMI cable needed to be fished behind the wall from one end of the room to the ceiling hole at the other end of the room where the projector would be installed. And after trying for hours to use regular cable fishing equipment we discovered that the cable pipe behind the wall had a 90 degree elbow at the corner, rather than 30 degree elbow normally used. This meant the stiff HDMI cable would not get through, unless we hack into the drywall, which would have meant we will have to repair the drywall afterwards. Then he improvised a genius plan that involved a ping-pong ball attached to a synthetic thread and a strong suction shop vac!

We had 100% custom screen done as we wanted to use almost entire wall as our viewing canvas without leaving any dead-space around. He is a “measure seven times and cut once” type of pro and everything fits with flawless precision. Surround speakers on walls around the room were installed with precise calibration too. Speaking of calibration, it was super fun and interesting to watch how all those different types of equipment are tied together to produce a viewing environment that provides completely immersing experience when you watch a movie or a hockey game.

If you are considering to build a media room, or just a projector installed to enjoy your favorite shows, do yourselves a favor and give a call to these guys. You won’t regret.